Cory Tressler on HomePod in the Classroom 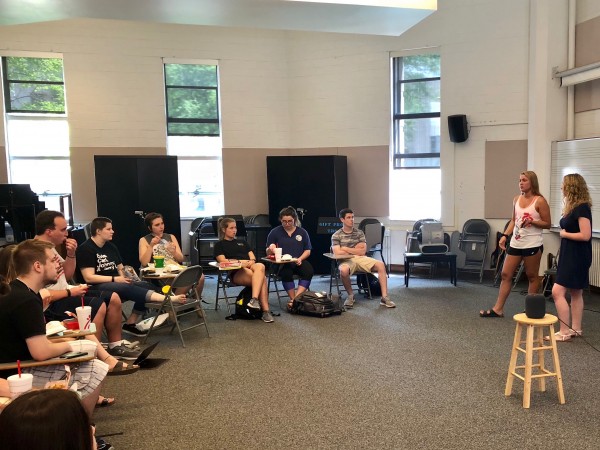 Every May, I have the fortune of teaching a 4-week long study abroad course focusing on 1960s British Invasion rock ‘n roll at The Ohio State University. This musicology/music appreciation course consists of in class and online activities that naturally lend themselves to listening activities involving podcasts, YouTube, Apple Music playlists, etc. Each year I look for new ways to explore the course learning objectives through new content, activities, and/or new technology. This year, upon hearing first-hand feedback and reading online reviews, I decided to try using Apple’s new smart speaker, HomePod, in my classroom.

I went into this experience knowing that the HomePod would probably sound pretty amazing when playing music and I was not disappointed. My first test was via an AppleMusic playlist streaming through the HomePod and the sound was nothing short of spectacular. You could literally walk around the large circular room and listen from different locations and angles and always get a full, beautiful sound allowing for careful listening practices, like concentrating on a specific instrument within the music. When comparing the playback of George Harrison’s classic “Here Comes the Sun” via HomePod and the mounted classroom speakers, the sound difference was instantly recognizable. The classroom speakers sounded like they were coming from a fixed location (which they were) and thus pushing music to the listener from a specific location, making some locations in the room sound better (the sweet spots) than other locations. The HomePod experience was much fuller, with any location within the room receiving a rich flow of sound and the ability to hear all parts clearly and precisely.

I next explored using HomePod to stream a playlist from the Google Play iOS app, this time using Eric Clapton’s cover of Bob Dylan’s “Don’t Think Twice, It’s Alright”. Immediately upon playing the playlist, I noticed a significant difference in the sound coming from the HomePod. The music sounded quieter and maxed out very low, with fewer dynamics, which was amplified within the spacious classroom environment. Additionally, when tapping to play music in Google Play there was a long delay from tap to output. The wall mounted speakers provided a preferred listening experience over the HomePod when connected to the iPad via the headphones port and playing the Google Play iOS app. The classroom speakers produced a better experience, with more control over volume. This poor performance led me to suspend any use of Google Play through the HomePod in class.

In addition to experimenting with music playback, I also wanted to test video from YouTube and if the HomePod could become a PA via a microphone app. I installed a couple different microphone apps on the iPhone 8 and iPad Pro and connected to HomePod. An ideal result would have been the ability to speak into the iPhone or iPad and have the sound come through the HomePod seamlessly to provide audio amplification in the classroom. Unfortunately, the apps currently available either don’t properly connect with HomePod or create a 3-5 second lag between talking into the iPhone or iPad and playback through the HomePod, which renders the app useless for consistent instructional use. As for YouTube, I would rate the experience similar to Google Play. The sound was quiet and topped out a volume that did not fit the room.

If I was building a classroom and I was going to go 100% Apple (Mac, iPad, AppleTV), then I would strongly consider installing a HomePod. In pretty much any other scenario HomePod doesn’t meet all the audio needs within the classroom setting, and that’s okay. The sound quality produced when playing Apple Music through HomePod is a stellar experience and an outstanding option for many settings. Finally, the HomePod is very new, it will evolve and hopefully, this evolution will include better support and playback of non-Apple music streaming services.